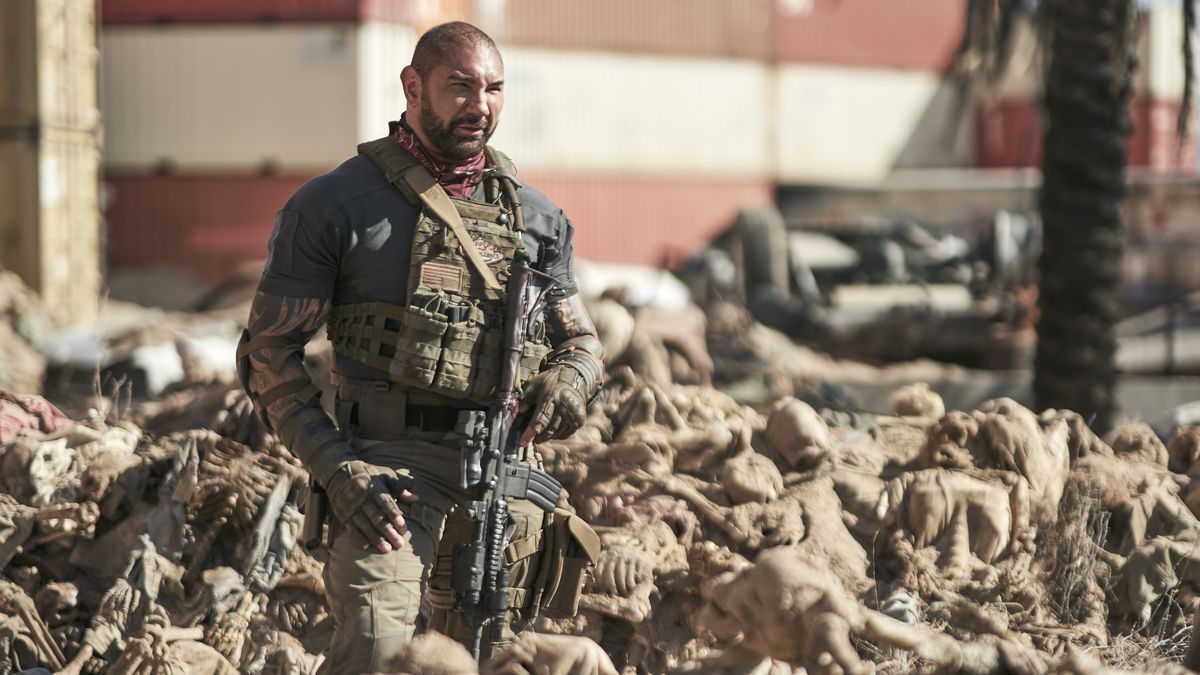 Comparing a film to its predecessors is an easy way to market it to potential consumers. For example, the 1987 film “The Monster Squad” can be thought of as “The Goonies” combined with the Universal Monsters. When you mix two existing themes, you can paint a clearer picture of the mood and plot, but you also risk making your writing appear significantly less imaginative.

This is the situation with Zack Snyder’s latest picture “Army of the Dead,” which is a mash-up of numerous titles. Among these are “Kelly’s Heroes,” “Ocean’s 11,” “John Carpenter’s Ghosts of Mars,” and the “Left 4 Dead” video game franchise. However, as a result of these basic themes, several of the characters and plot beats appear formulaic and predictable, detracting from any potential influence they may have had. Despite some good performances, engaging action moments, and breathtaking gore effects, viewers will feel every second of the film’s 148-minute duration.

An outbreak of zombies begins in Las Vegas when a military error releases a creature capable of creating zombies. The zombie-creating beast makes its way towards town. As the infected advance across the city, some of the city’s more daring people join forces with the military to stave off the oncoming horde long enough for the city to be shut off from the rest of the world.

As the deadline for the government’s threat to nuke the whole metropolis approaches, refugee camps have sprouted up alongside the barricades. Many people have been displaced as a result of the crisis, and their future prospects are unknown. Tanaka (Hiroyuki Sanada), a wealthy guy, approaches Scott Ward (Dave Bautista), one of Vegas’s heroes, with an offer: penetrate the city before the bombs fall and take $200 million from a casino vault. Tanaka is keen to capitalize on the circumstance. Marianne Peters (Tig Notaro), Vanderohe (Omari Hardwick), and old fight buddies Maria (Ana de la Reguera) and Vanderohe (Omari Hardwick) round out the team, which also includes newcomer Dieter (Matthias Schweighofer).

Scott accepts and forms his squad. Unfortunately, Ella Purnell’s character, Kate, Scott’s daughter, insists on accompanying the crew in order to look for any missing refugees. Once inside, the motley crew realizes that Las Vegas is in disarray, that there are a slew of zombies, and that a different kind of monster stands between them and their money.

“Army of the Dead,” co-written by Zack Snyder, Shay Hatten, and Joby Harold, is undoubtedly Zack Snyder’s least stylized film since “Dawn of the Dead,” which Snyder also co-wrote. The opening titles, which represent the collapse of Vegas and the rising of these heroes, are the most visually appealing. It’s effectively a zombified replica of his “Watchmen” intro, but aside from that, the rest of the picture is devoid of speed-ramping or long, lingering shots demanding significance.

It is undoubtedly better photographed than other action blockbusters, and its editing is far more rational than the great majority of other films. “Army of the Dead” lacks true flair and a visually striking style, which is a break for Snyder from one of his main strengths.

The film’s plot is plain and easy to follow, with simple aims, straightforward turns, and a few amusing digressions. A big section of the ensemble isn’t given much to do, but a few of the actors find inventive ways to give their characters memorable personalities. Bautista, a better performer than this writing, shows the trepidation of a fighter who is confident in his abilities but pained by the tragedy to which they are linked.

This is due to Bautista’s superior performance to the script. He is given pointless banter and little in the way of a meaningful arc with Purnell, who tries her best with a bunch of empty conversation and a character that appears to exist simply to pretend that the story has some sort of emotional core to it. Garret Dillahunt portrays the obvious serpent, the businessman chaperoning Tanaka’s staff, but he also finds delicious moments of cockiness among his smarminess.

Notaro is also terrific as the sassy, realistic helicopter pilot who doesn’t mince words about the fact that all he wants is a paycheck. It’s worth noting that her entire performance took place in front of a green screen because the previous actor had to be changed due to (alleged) sexual misbehavior on his part. Even if one is unaware of this fact, it is not highly evident; yet, viewers may note an unusually large number of frames in which Notaro appears alone.

Hardwick and Schweighofer, who have limited screen time together, are the most impressive members of the ensemble because, in addition to playing lovable characters, they are able to develop a convincing sense of chemistry with one another. Dieter, as played by Schweighofer, is a stereotype of the heist film genre. He is the eccentric genius who, while not as tough as his fellow heist movie protagonists, ends up being charming in his own right, owing largely to how he plays off Hardwick.

The make-up effects, such as the blood and the design of the creatures, employ a blend of real effects and computer visuals to create a horrific and exciting environment. There are a few cartoonish passages, and the wide panoramas of the wrecked city look like a video game backdrop, but none of it is too distracting, and it is frequently complemented by some amazing viscera and zombie dispersal.

The perplexing history behind the “advanced” animals at the heart of Vegas is a convoluted attempt to create more intelligent and challenging foes, but it makes little sense. It serves no purpose other than plot convenience, and when combined with the fairly repetitious storyline, which merges the obvious clichés of both zombie flicks and heist films, it deprives the story of any true originality or surprises. The plot lacks genuine inventiveness or surprises.

A few minor details in the backdrop contribute to the overall effect of “Army of the Dead.” The United States government is the subject of unsuccessful satire and social commentary, as though the authors saw the film “Robocop” and assumed they knew how to make fun of such subjects. Furthermore, the Vegas location gives some amusing visual gags and novel venues for action. There is also some innovative weapons and kills, however a big amount of it is simply mass destruction. Furthermore, Snyder continues to be the guy with the least skill for selecting music for a film. The man is skilled in many areas, but one of them is not picking up needle drops.

Despite the fact that this particular mash-up is unique, “Army of the Dead” is a solid action-horror film with some memorable carnage and thrills. However, the film’s compelling performances and great visuals are frequently hampered by its conventional tale, which is a shame because “Army of the Dead” has some memorable splatter and thrill moments.

It would be an easy recommendation as a dramatic adventure film full of double-crosses, lots of money, flashy equipment, and horrific monsters if it were 45 minutes shorter. Instead, these traits are spread too thinly throughout a story that is overly predictable and only occasionally delights the reader.